Off the Page: Todd Papageorge 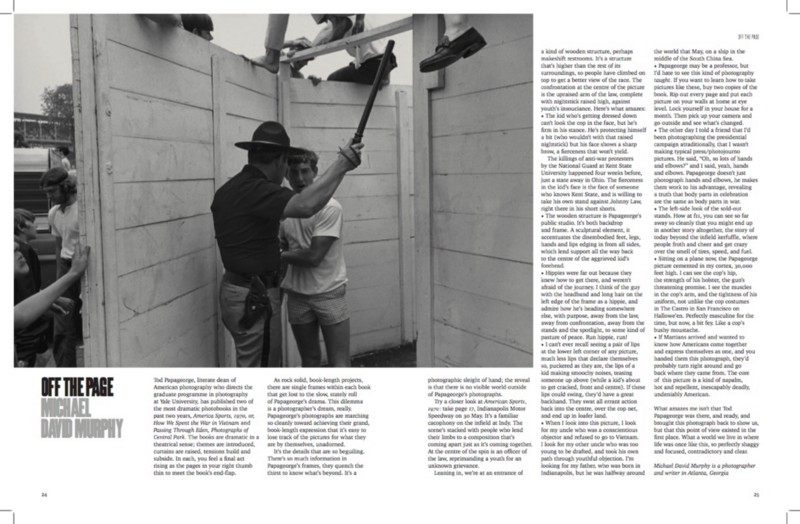 Tod Papageorge, literate dean of American photography who directs the graduate program in photography at Yale University, has published two of the most dramatic photobooks in the past two years, America Sports, 1970, or, How We Spent the War in Vietnam and Passing Through Eden, Photographs of Central Park. The books are dramatic in a theatrical sense; themes are introduced, curtains are raised, tensions build and subside. In each, you feel a final act rising as the pages in your right thumb thin to meet the book’s end-flap.

As rock solid, book-length projects, there are single frames within each book that get lost to the slow, stately roll of Papageorge’s drama. This dilemma is a photographer’s dream, really. Papageorge’s photographs are marching so cleanly toward achieving their grand, book-length expression that it’s easy to lose track of the pictures for what they are by themselves, unadorned.

It’s the details that are so beguiling. There’s so much information in Papageorge’s frames, they quench the thirst to know what’s beyond. It’s a photographic sleight of hand; the reveal is that there is no visible world outside of Papageorge’s photographs.

Try a closer look at American Sports, 1970: take page 17, Indianapolis Motor Speedway on 30 May. It’s a familiar cacophony on the infield at Indy. The scene’s stacked with people who lend their limbs to a composition that’s coming apart just as it’s coming together. At the centre of the spin is an officer of the law, reprimanding a youth for an unknown grievance.

Leaning in, we’re at an entrance of a kind of wooden structure, perhaps makeshift restrooms. It’s a structure that’s higher than the rest of its surroundings, so people have climbed on top to get a better view of the race. The confrontation at the centre of the picture is the upraised arm of the law, complete with nightstick raised high, against youth’s insouciance. Here’s what amazes:

• The kid who’s getting dressed down can’t look the cop in the face, but he’s firm in his stance. He’s protecting himself a bit (who wouldn’t with that raised nightstick) but his face shows a sharp brow, a fierceness that won’t yield. The killings of anti-war protesters by the National Guard at Kent State University happened four weeks before, just a state away in Ohio. The fierceness in the kid’s face is the face of someone who knows Kent State, and is willing to take his own stand against Johnny Law, right there in his short shorts.

• The wooden structure is Papageorge’s public studio. It’s both backdrop and frame. A sculptural element, it accentuates the disembodied feet, legs, hands and lips edging in from all sides, which lend support all the way back to the centre of the aggrieved kid’s forehead.

• Hippies were far out because they knew how to get there, and weren’t afraid of the journey. I think of the guy with the headband and long hair on the left edge of the frame as a hippie, and admire how he’s heading somewhere else, with purpose, away from the law, away from confrontation, away from the stands and the spotlight, to some kind of pasture of peace. Run hippie, run!

• I can’t ever recall seeing a pair of lips at the lower left corner of any picture, much less lips that declare themselves so, puckered as they are, the lips of a kid making smoochy noises, teasing someone up above (while a kid’s about to get cracked, front and centre). If these lips could swing, they’d have a great backhand. They swat all errant action back into the centre, over the cop net, and end up in loafer land.

• When I look into this picture, I look for my uncle who was a conscientious objector and refused to go to Vietnam. I look for my other uncle who was too young to be drafted, and took his own path through youthful objection. I’m looking for my father, who was born in Indianapolis, but he was halfway around the world that May, on a ship in the middle of the South China Sea.

• Papageorge may be a professor, but I’d hate to see this kind of photography taught. If you want to learn how to take pictures like these, buy two copies of the book. Rip out every page and put each picture on your walls at home at eye level. Lock yourself in your house for a month. Then pick up your camera and go outside and see what’s changed.

• The other day I told a friend that I’d been photographing the presidential campaign atraditionally, that I wasn’t making typical press/photojourno pictures. He said, “Oh, so lots of hands and elbows?” and I said, yeah, hands and elbows. Papageorge doesn’t just photograph hands and elbows, he makes them work to his advantage, revealing a truth that body parts in celebration are the same as body parts in war.

• The left-side look of the sold-out stands. How at f11, you can see so far away so cleanly that you might end up in another story altogether, the story of today beyond the infield kerfuffle, where people froth and cheer and get crazy over the smell of tires, speed, and fuel.

• Sitting on a plane now, the Papageorge picture cemented in my cortex, 30,000 feet high. I can see the cop’s hip, the strength of his holster, the gun’s threatening promise. I see the muscles in the cop’s arm, and the tightness of his uniform, not unlike the cop costumes in The Castro in San Francisco on Hallowe’en. Perfectly masculine for the time, but now, a bit fey. Like a cop’s bushy moustache.

• If Martians arrived and wanted to know how Americans come together and express themselves as one, and you handed them this photograph, they’d probably turn right around and go back where they came from. The core of this picture is a kind of napalm, hot and repellent, inescapably deadly, undeniably American.

What amazes me isn’t that Tod Papageorge was there, and ready, and brought this photograph back to show us, but that this point of view existed in the first place. What a world we live in where life was once like this, so perfectly shaggy and focused, contradictory and clear.